Just in Time for Pioneer Day! 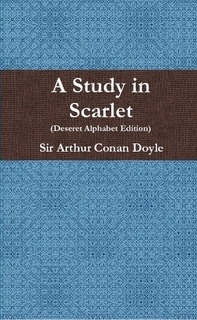 OK, OK, so the ties were a bit disappointing. The bumper stickers turned out well, though. Now, however, we have something really exciting—

Last year, I was having dinner with Ken Beesley and our respective wives, and he mentioned casually that sometime in the past someone at BYU transcribed a Sherlock Holmes story into the Deseret Alphabet. That, methought, would be an interesting project.

(It's easy for me from my perspective to take the book’s anti-Mormonism lightly, because the whole thing is really silly if you know much about pioneer Utah—which Doyle obviously does not. I don’t know how seriously people take it today, except that the book was removed from one school library on that basis. Still, fleeing Salt Lake by going over the mountains to Carson City?)

Anyway, to make a long story short, I’ve spent the last few months doing the transcription and proofing it. I wrapped the process up yesterday and put it up on Lulu.  (Yes, yes, I know Lulu isn’t the best choice for POD publication. I already had an account there and wanted to wrap things up in time for the 24th. And I have another project I want to focus on which is frankly more fun.)

In the interest of full disclosure, since I only put it up yesterday, I haven’t seen what it actually will be like when printed and bound, and it might be as bad as the ties. I fully expect to do some tweaking once I see my copy. Caveat emptor.
Posted by Tseng-tsz at 11:35 AM 2 comments: