Third time’s the charm, I suppose.

On Sunday, I was in the vicinity of Cedar City with assorted relations and friends to see the annular solar eclipse. I was determined to finally get the precise location of the John Morris headstone using the Deseret Alphabet. This was my third attempt. The first time, I took some nice pictures but didn’t have my iPhone’s geotagging turned on, so it didn’t help an awful lot. The second time was a quick wooosh past the cemetery on a tour bus and I couldn’t even spot it. Now I was going to do things right.

As we drove past the cemetery, I was riding shotgun and kept my eyes peeled. I spotted it easily enough and we pulled over so that I could get a picture. 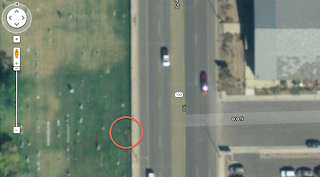 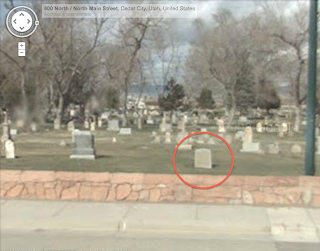 I did not check the Iron Mission State Park visitors center down the road to see if they sell t-shirts, but considering the fact that the last time I checked nobody there even knew that there was such a thing as the Deseret Alphabet, let alone that there was a replica of a 19th century headstone in the Deseret Alphabet to be found a couple of blocks away—well, I have my doubts.