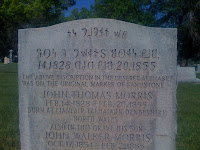 Well, crap.
I happened to be in Cedar City this past week, and we accidentally drove past the Cedar City cemetery while we were there. This called to mind some adventures my wife and I had last summer in the same area.
When people list the materials available in the Deseret Alphabet, one of the items always listed is "a tombstone in Cedar City." At least, I always list it, and that's the way I've always listed it in the past.
My wife and I attended the Utah Shakespearean Festival last summer, and while we were there, I thought it would be a good opportunity to track down this tombstone. So, armed with my iPhone (complete with GPS), we walked north from our hotel towards the cemetery.
Along the way we ran into a local historical museum and we went inside. After all, we didn't know whose tombstone we would be looking for or where said tombstone is. It shouldn't be surprising that it was rather difficult to get help. Most of the people there didn't know what the Deseret Alphabet was. One of them said she'd heard of a tombstone in the cemetery with funny writing on it, but she didn't know where it was. Her sister-in-law, however, could probably help us, so she pulled out her cell phone and called her sister-in-law, who was fortunately available and told us that it was about halfway across the older section of the cemetery. (At this point I don't remember whether or not she said it was towards the road.) She didn't remember whose tombstone it was.
Fortunately for us, it was practically on the road. We found it, rested a bit, took some pictures, then headed back to our hotel.
One thing I had intended was for the pictures taken on my iPhone to precisely identify the location of the tombstone. It wasn't until just now when I checked that I found out that I hadn't turned on that location stamping for pictures when I took them. (Excuse me a minute while I bang my head against the wall.) So I'm going to have to do it the old-fashioned way: with Google maps.
The tombstone is actually a relatively recent replacement for one originally made for John T. Morris, who died 20 February 1855. The original was made of local sandstone and weathered rather badly. Morris was a Welshman and must have been among the earliest settlers in Cedar City, which was itself only founded in its current location in 1855. (It had originally been established at a somewhat different site only four years earlier.) Morris was 27 at the time of his death and died only four days before his infant son, John Walker Morris, aged five months. One presumes that there was an infectious disease that carried them both away.
It is located between 700 and 800 North Main Street in Cedar City, at approximately 37° 41' 24" N 113° 3' 43" W. Actually, I think it's a little to the south of this, but here's a map, anyway:
View Larger Map
It is very close to the eastern edge of the cemetery. As I recall, there are practically no tombstones between it and the road. It's large and upright with the writing facing the road. The writing has some interesting features, including a totally unexpected spelling of "John," and an M-glyph that is practically a base clef.
I did try to get a glimpse of it from our tour bus as we drove past, but because I hadn't expected to drive past the cemetery, I hadn't refreshed my own memory of the stone's appearance and so managed to miss it.
I've also put a complete set of pictures my wife and I took up on Mobile Me.
Meanwhile my apologies for my lapse of a year ago in not getting my iPhone properly set up before snapping away.
Posted by Tseng-tsz at 8:27 PM 1 comment: